You are here: Home » Petting Zoo

We all know that good things “come & go” but the surprises can sometimes be difficult to absorb.  Our beloved Pedro passed away peacefully this last week.  Anyone who has visited the Gold King Mine has had an opportunity to interact with Pedro.  This four-legged ambassador drew in hundreds of visitors to our little spot of heaven by braying loudly in an attempt to get fed some treats.  Typically, he was penned up with treats nearby but just out of reach.  All it takes is a few caring folks to walk over and give some treats to Pedro.  Occasionally, Pedro would also slip the confines of the Gold King Mine in an attempt to “go to town”.  Jerome is just 1/4 mile down the paved road to the Jerome Fire Department and the Town of Jerome.

Many of Jerome’s long-time residents, including Jerome Police and Fire personnel, can attest to Pedro’s prancing through the narrow streets of Jerome, eluding all who attempted to thwart his efforts to extend personal relationships with tourist type humans.  Anyway, that’s the way we would like to think of it, but you can just imagine the scene of Don chasing after Pedro down and up the hills of Jerome.  Typically, Don would be riding his “horse”, usually the Harley dirt track bike, in an attempt to corner Pedro somewhere.  Pedro always “gave up”, running out of gas long before Don did.

There is a grave site honoring the previous Pedro’s, yes there have been a few.  We’re not going to divulge the location, but suffice it to say that Pedro will soon be in his own “Field of Dreams”.  Also, if you are someone who has attended the many music or VW festivals at the Gold King Mine, you have likely seen the rustic wooden, (of course . . .) grave marker for the Pedro lineage. 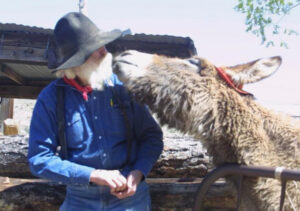